My private studies in the language these days are centering around learning more Cheng Yu (成语), or Chinese Idioms. Chinese Idioms, like English idioms, are a fantastic way to get your point across. But unlike in English -where you can deduce the meaning just by listening closely (e.g. "The pot calling the kettle black"), in Chinese, you often cannot. Chinese idioms are different in that they contain a much longer story reduced down to 4-8 representative characters. It would kind of be like hearing the entire story of Little Red Riding Hood, distilling its moral lesson down to one phrase, and using it in a sentence. Wow that was a real "see grandma get wolf" situation!....or something like that.

Chinese history has 5000 years worth of moral stories, some based on historical events. The very educated Chinese speaker often speaks in idiom after idiom. Miss having read and learned one of the stories and its accompanying idiom and you risk losing track of your speaker's meaning. The idioms are often subtle and complicated. It's intense. So, for me, that's where the next frontier of deepening fluency lies: in the history and the poetry.

（see below for my most recent research) 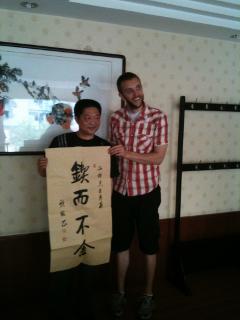 One early spring, during the final days of the Tang Dynasty, the Poet Deng Gu returned to the ancient countryside of Jiang Xi to converse with the local learned men. A local Buddhist monk -an aspiring poet himself- brought drafts of his work to Deng Gu to read.  Deng Gu read each draft, one by one, and couldn't help but offer his thoughts to the Monk.

"Your poem of the early plum blossoms contains a line about the early blooming on the numerous branches of the plum tree, but if the blossoms are on many branches, then it wouldn't count as the early bloom." The monk listened intently. Deng continued, "I'd think the word single would be more appropriate in the place of the word numerous when describing the tree." The monk was thrilled with the change.

When the local learned men heard of Deng's advice, they described him as the Monk's "One Word Teacher"  because Deng was able to elevate the quality of the Monk's work by correcting just a single word, thus signifying the level of his skill and prowess as both a poet and a teacher.

My Interpretation: While there isn't a direct idiomatic corollary in English for this Chinese saying, our concept of true mastery does include a respect for parsimony. Pascal once wrote, "If I had more time, I would've written a shorter letter." Famous philosophers and teachers have echoed this sentiment many times since. The true master does the most with the least. Chinese finds an elegant and direct expression for such mastery in the phrase to be one's "One Word Teacher".

In my teaching, I find the most crucial corrections needed to elevate a Chinese language learner's ability. Perhaps, for you, it IS just one word. One thing. One idea. We can find it.

There once was an intellectual of the Chu Kingdom who was very poor. He longed so much for a way to find wealth. One day he read a book that told him to find the leaf behind which the Mantis hides while staking the Cicada. If he himself hid behind that same leaf, he would become invisible.

All day the poor man tilts his gaze toward the trees in search of the magic leaf. Finally,  a Cicada! And concealing behind a lead: The Mantis. The poor intellectual plucks the leaf, but in his excitement, drops it to the ground among many other leaves. He decides to sweep up the whole bunch and take them home for further inspection.

As is often the case in Chinese stories, The man enlists the help of the long suffering and patient wife by lifting the leaves, one by one, to his eye and asking her if she can see him. She repeatedly tells him, "Yes, I can see you." The man is intent on finding the magic leaf once again and so continues, on and on past her breaking point. In exasperation, she finally blurts out dismissively, "No, I can't". The man is thrilled! He thinks he's finally found the magic leaf, through it a secret to gaining wealth, and so races off to the local market to test its capabilities.

He brazenly begins "concealing" himself behind his magic leaf and starts stealing from the villagers! They clearly see him in full view and immediately capture him.  Delivered up to the officials, the poor intellectual describes and explains all his actions. The presiding official gestures to the magnificence of the nearby mountain range, holds back a bit of laughter, and remarks, "Wow! You really let one leaf obstructing your eye to conceal the grandeur of Tai mountain!"

My interpretation: I believe this idiom most closely echoes the sentiment behind the English phrase: "You can't see the forest for the trees," which is used to describe when a person gets caught up on one small aspect of a situation, perhaps thereby missing a crucial component which prevents them from seeing the essence and truth of the whole context.

Sound Chinese
Study With Me 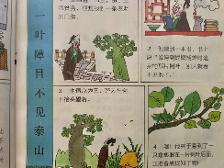